Traditional grid systems of India. A talk by Sri Parameshwar Raju on 14th November at 5:00pm

Recording of the talk is available at
https://www.youtube.com/watch?v=hHo8hyLDpj8

A documentary film on Parameshwar Raju is available in YouTube
https://www.youtube.com/watch?v=6QjpHEQOj80 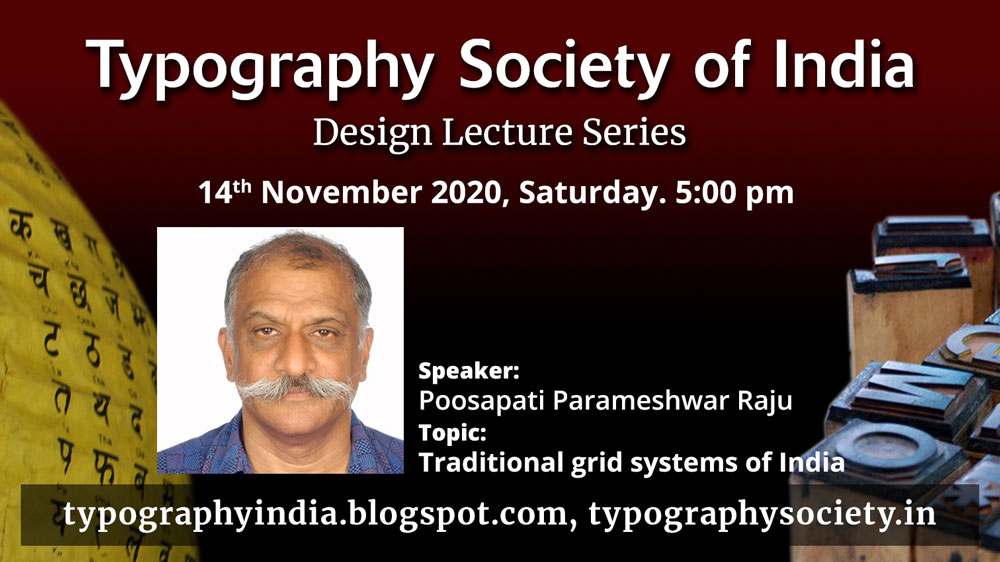 This topic will be useful for those in the area of graphic design, product design, architecture, craft and artefacts.

In India, the grid was always a part of tradition and it has been practiced with the faith to the extent of religious doctrine. It has a large variety in form and application. In the past few centuries, the meaning of grid has shifted from interface between physical and super physical worlds to interface between physical world and its perception by the rational cognition. Process of creation is an initiation and a sharing knowledge of the craft and information gathered and referred from nature.Listening, seeing, feeling, understanding and experiencing the physical forms and worshiping this source of creation gave an immense joy of being part of it. It was a source of wonder and an aesthetic which made living a wonderful experience.Life in nature and its adaptation to its surroundings was a visual experience. This knowledge led to create things. The basics were from nature. The geometry to the existence and the functions of the five elements made creating of objects with added functionality a joyful experience.From making of houses and shrines to toys for children to weaving to cultivation and gathering of food to making of vessels for cooking and using fire as a source of energy have a reference in nature. Looking for an answer or an idea is unique. People in various geographical regions have created and adopted things for their requirements which are related and referred to their surroundings. Hence the change of aesthetic and functionality of things created by them. There is so much creation around us. Being part of this creation helps in understanding nature better. One tends to look inside oneself and share that experience. The experience is different. Hence the variation in the same idea which makes creating a object exiting. This started a process of trade with and within the communities.

The exercise in this set is creating of products and images from shared information from nature. The speaker attempts to use this aesthetic in blending it into the narrative of nature.

Parameshwar’s creativity as an Artist, Calligrapher and his expertise in Communication, Documentation and Publication design, is celebrated across the Globe. In his work, we witness the phenomenon of a new genre that could be termed as iconic -calligraphy. The artist engages with a distinguished form of expression that traverses both traditional and contemporary terrains.

His images are offspring of an epistemological discernment and the minimalist’s aesthetic, ensuing from his personalized research of iconography, signs, and symbols inherent in the Indian ceremonial culture.  He has been practicing for the last 30 years.

Parameshwar is one of the Trustees of Jagdish and Kamla Mittal Museum of Indian Art, Hyderabad. His Book Designs and Documentation work for the Museums  have set new standards for Museum Publications and is being followed by leading Museums all over the world.

He is in the process of setting up a Foundation for the Arts for generating work for artisans with his design forms and traditional art and craft, for the self reliance of artisans, specific to Indian regions.

Senior Research Fellowship (2013 to 2015) from the Ministry of Culture, Government of India

At  Park Hyatt, Hyderabad, exhibition of selected works; Must have been love, curated by Koeli Mukherjee Ghose, February to March 2016

Showcasing of Three Wise Men to the Tree of Celebration - Journey of a Breath: A narrative in calligraphy, unveiling the main incidents reflecting the life of Jesus and Christian Symbolism, and launch of the artist’s book - The Tree of Celebration, curated by Koeli Mukherjee Ghose, 11 December 2015 to 12 January 2016

Forms of Devotion curated by Sushma Bahl, showcased by MOSA in Shanghai China,  from 5 November 2015 to February 2016.

Geetopadesham from the Mahabharata series in a group show titled ‘Calligraphy tells the Beauty’ at Korean Cultural Center, New Delhi, 14 September to 16 October 2015 and at the InKo Centre in Chennai, 26 October to 15 November 2016.

Khushkhati, A workshop of Urdu Calligraphy with M A Gaffar and his students of Idara e Adabiyat at the Hyderabad Literary Festival 2015, curated by Koeli Mukherjee Ghose and invited by Goethe Zentrum, Hyderabad.

One Asia Project, showcased a selection of work from the series on the ‘Sun’ in Taipei, 2014

Hyderabad Literary Festival, Saptaparni, Hyderabad, and Goethe Zentrum released Ramayanam in Calligraphy by Parameshwar Raju and showcased the series of 34 frames at Saptaparni, curated by Koeli Mukherjee Ghose from February to March 2014.

Lore of belief at Gallery Ashok, Amsterdam, exhibited from July  to November 2013.

Exhibited at the Phoenix Art Festival 2013, at the Nehru Centre, Mumbai.

Lore of Belief - a  traveling exhibition  of his works curated by Art Historian, Koeli Mukherjee Ghose, showcased at the Poecile Gallery, Hyderabad, in March 2013, and earlier in January 2013 it was showcased at the Orthic Creative Centre, Nanappa Gallery, Kochi, as a collateral event during Kochi Muziris Biennale in early January 2013

Invited to take part in Ek Sutra an International Exhibition of Calligraphy at IIC Gallery, New Delhi, by Qalamkari, curated by Qamar Dagar, as part of the Project One Asia, 2012

Presentation at the pavilion of Indian art at the 5th International Biennale in Beijing in September 2012. Creating a cultural connect between both the countries at the very onset of the exhibition prepared and presented by Lalit Kala Akademi.

The Museum of Sacred Art, Brussels, Belgium houses a collection of all series - from Buddhist Symbols, Sikh Symbols, Jewish Symbols, names of Allah, the Ahura Mazda, Christian Symbols, Epic Narratives, the Ramayanam and the Bhagavatam under the title, Timeless Art.

February 2004 to July 2008: Concept and execution in setting up the Kalahita Art Foundation, by Nagarjuna Fertilizers and Chemicals Limited as Director of Arts.

2002 to 2003: Member of Design and Marketing Team for revival of APCO, Department of Industries, Government of Andhra Pradesh.

Tree of Celebrations Depiction of the Story of Jesus in calligraphy, by Poosapati Parameshwar Raju

Divine Presence –  Symbolic depiction of the feet of of Gods, Godesses and Spiritual masters.

Shakti – Calligraphic depiction of the Godess as the embodiment of strength in a range of images with reference to epic narratives and mythologies, by Poosapati Parameshwar Raju

Nava Durga – Depiction of nine forms of Durga, worshipped and celebrated during spring and autumn in India.

Dwadash Jyotir Lingas – A Visual narrative of the twelve Jyotirlingas in a series of twelve works along with a few images of the adoration of Shiva, by Poosapati Parameshwar Raju.

Bhoota lingas –  Bhoota lings in calligraphy is a anthology of forms from the Pancha bhoota sthalam; the five  temples dedicated to Shiva, each being an expression of the five elements of nature, land, water, air, sky  and fire by Poosapati Parameshwar Raju.

Ashtavinayaka – Ganesha in Calligraphy including all the forms of Ashta Vinayaka, a visual pilgrimage, covering the eight ancient holy temple of ganeshas in natural formations, that are situated around Pune  by Poosapati Parameshwar Raju.

Hanuman – A selection of Pictorial calligraphy by Parameshwar Raju to exult the great role hanuman played in Ramayanam that he thoroughly studied from the composition of Tulsidas and other great devotees and saints. The story of Hanuman is evoked here to restore Veer Rasa, an essence of internal strength to overcome challenges of our body and mind. The lyrical rhythm of Calligraphy transmits a beautiful sense of energy.

Ganesha – Parameshwar’s references are from the temple carvings, rituals and cultural narratives and his works unfurl a plethora of images and beliefs that go hand in hand in seeing  Ganesha in as many forms as his devotees have desired down the ages.

Gurus and Avataras – A series dedicated to the Spiritual masters bear proof of the artist’s dexterity in conveying distinctive detail of personalities, created with minimum strokes that characterize his work by Poosapati Parameshwar Raju

Bhagvatam – Krishna depicted in calligraphy, across narrations from Hindu philosophical and theological tradition by Poosapati Parameshwar Raju   ions wherein he is portrayed in various forms and amidst a range of activities

Radiant Flow -  a series on deepam by Poosapati Parameshwar Raju.

Must Have Been love – Interpreting devotion in the form of love for nature , the universe, the country , its tradition and mythologies by Poosapati Parameshwar Raju

The Valentine Guy – The healing power of Love by by Poosapati Parameshwar Raju.

Jagannath of Puri – the cosmic collaboration of the creator and all that is created, The overwhelming significance of Jagannath combining the spiritual and the social aspect of working together.

The Nurtured Daughter - The journey of the girl child who is conditioned to grow up into a strong woman.

Guidelines for recording video for Speakers of Typography Society of India

November 07, 2020
IN association with www.hasgeek.com, Typography Society of India design lecture series will now be streamed live in various social media platforms like YouTube, Facebook, Twitter etc apart from the hasgeek.com website. Normally, our lectures are scheduled on Saturdays at 5:00pm IST (1700Hrs). Due to the technical requirements of various live streaming platforms, we have decided to record the lectures in advance. Some of the guidelines for recording the talks are given below. The easiest way to record your presentation is by using Zoom. Zoom meeting time limit while using a free account is 40 minutes, but our presentations are normally less than 30 minutes with a 10 minute Q&A session after the talk. You may use a dedicated web camera or any video camera that allows for quality recording. Please ensure that it’s capable of recording full HD video in landscape (horizontal) mode. Make sure that you’re in a well-lit room, with a background free of clutter. Choose times to record where
Read more 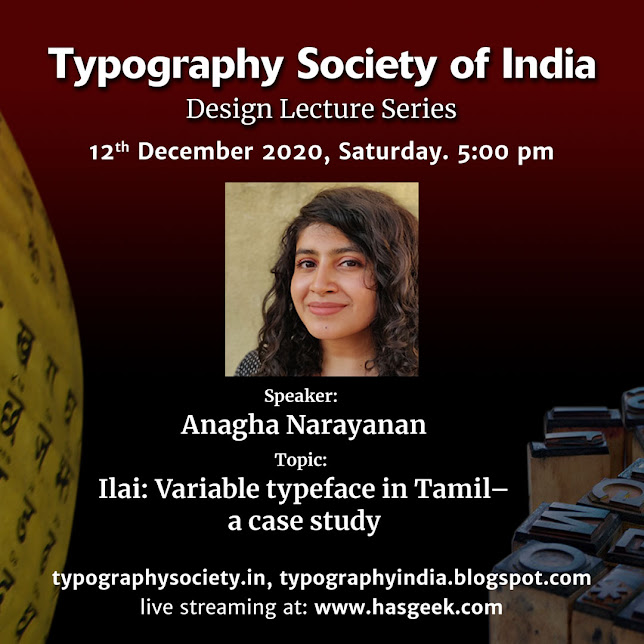 Typography Society of India. Design Lecture Series.  Talk No: 10 Date: 12th December, 2020.  Time: 5:00pm Speaker: Ms Anagha Narayanan. Topic : "Ilai: Variable typeface in Tamil — a case study" This is available in YouTube:  https://www.youtube.com/watch?v=_ZYlMBBir2w Please subscribe to the Youtube channel of Typography Society of India. Live stream on : https://hasgeek.com/tsi/12dec/ Anagha Narayanan is a type designer from Hyderabad, India. From childhood, Anagha has been immersed in art and design, and has vivid memories of her father’s offset printing press. She has always been fascinated by letters, drawing them and collecting them in ephemera like postcards. Anagha is inspired by how type design is so closely knitted with culture and history, and does the task of preserving it graphically. She has interned at Black [Foundry] in Paris, and works at Universal Thirst in Bangalore, where she contributes to the design and development of various Indic typefaces. Anagha i
Read more